Kit Schindell is a member of Fairview Presbyterian Church, Vancouver BC.

I was home from Cambodia, back at work, chatting with a couple of colleagues about the wretched little village where we worked so hard every day. I chatted about the work, about the task before us, about the seeping evil of the village, about child sex slaves, about imprisoned girls, about human trafficking… and suddenly stopped, realizing I had gone too far. They were uncomfortable, distracted… they wanted to get on with other things. I apologized and the subject changed immediately, and Cambodia was once again just another place on the map. I could feel my face burn with embarrassment.

Now, when people ask, I say, "Wonderful weather! Greatest mangoes in the world." — and for many people that's enough.

Fairview Church has had a connection with Cambodia for several years now. I first went to this complex, recovering country in 2008 as one of two women on a team of ten — a team I have often referred to as "eight strong men and two ancient nurses". That time we renovated a dank, hideous, former child brothel into a church, medical centre, and school, now known as Rahab's House. We obliterated the ugly cells where imprisoned little girls serviced their adult male pedophile clients, and turned the place into a bright airy centre.

The ten of us came back to Canada, changed forever. We returned to our jobs and fell into the familiar pace of our Canadian lives. Oh, we were a motley crew: pastor, health care administrator, sous-chef, classics professor, businessman… but we'd faced things together that we had never before even considered. To this day there is a special bond among us.

And then this year, I had the tremendous honour of being selected to return. That this old girl had the opportunity to go once was a huge blessing. A second trip was an incredible opportunity. This time, four of us from Fairview Church joined up with four from an Anglican church in Vancouver and two men from a church in Australia. Our leader was Grant Wilson, Fairview's pastor and a veteran of several Cambodia trips. 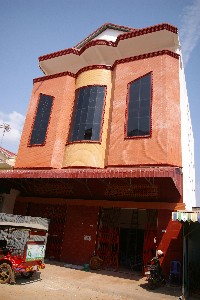 "The Sanctuary" (shown at the right) — just a few doors down from Rahab's House, our first project — was originally built as a hotel for pedophiles and a brothel for the children — one-stop shopping at its worst. But the economic downturn and increased interest by international police agencies caused the owners (organized crime personnel) to abandon the project. And one day, Brian McConaghy, founder of the Ratanak Foundation, looked up at the unfinished building and saw the windows and thought, "It looks like a sanctuary."

The Ratanak Foundation bought the building, and two teams from Canada went to do the work to turn it into a school, a meeting place, and a couple of apartments for mission personnel.

Our team went first, followed by a wonderful team from a Baptist church in Ontario. Our ages ranged from nineteen to mid-seventies. Our health ranged from excellent to "I-really-want-to-do-this-but-…". Our skills were likely excellent according to our chosen careers. But here we were painters. In this capacity, our skills were… well… negligible. Our teenage team member had worked summers with College Pro painters. One of our Australian guys worked in construction. We accepted their expertise with eager faith and got to work. We painted and painted and painted. Forty-eight rooms. We cleaned, we trimmed, we sealed, we primed, we second-coated, we "cut", we rolled. I do not want to see yellow paint for a very long time.

I walked up to the fifth floor one morning, looking for our nineteen-year-old painter. He was nowhere to be found. I looked from room to room, I looked on the balcony, I checked the "break" area… and then I looked up. There he was, ten feet above me, standing on a plank, cheerfully painting. I shuddered. Suffice it to say my prayers were heartfelt and fervent. My personal prayer every day was that no one would suffer any calamity beyond my clinical skills, and God graciously answered that prayer.

Ten of us, basically strangers to each other, were suddenly thrown into spending the best part of every day together. We shared rooms in twos and threes. We rose shortly after five a.m., shared a time of corporate worship, ate a rushed breakfast in the hotel "dining" room, gathered equipment and supplies (including first aid) and thirty litres of bottled water and piled into the van at 7:30 a.m. to head to the village. Paint, paint, paint. Paint, paint, paint. 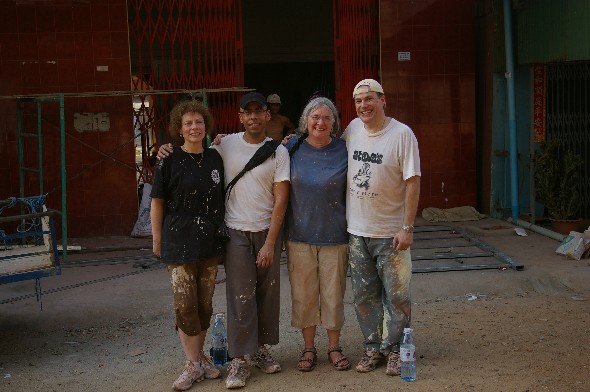 Lunch was prepared for us at Rahab's House. The former hellhole is now bursting at the seams: a kids' club every afternoon, an overflowing church service on Sunday, a medical centre for the community… . The songs and delighted shrieks of the kids stay in my mind to this day.

After lunch (chicken with bowls of rice and plates of sliced mango was a team favourite, accompanied by fiery sweet chili sauce, bottled water, rolls of pink toilet paper for napkins), we went back to work. We left the village late in the afternoon as the village heated up in more ways than one. The temperature rose, and the paying clientele started to arrive to consume the children's innocence.

We headed back the eleven kilometers to Phnom Penh. We were filthy, exhausted, sweaty, covered in the red dust that is everywhere in Cambodia. Sometimes we were too tired to speak. But the day was by no means over. The daily debrief was only an hour away so we hurriedly took our showers, put on clean clothes, dried our hair… and met for the debrief. 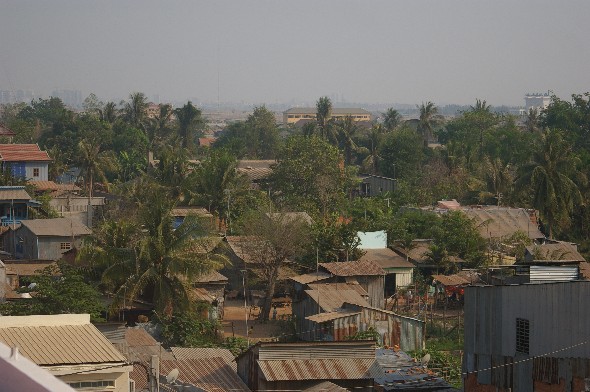 Part of Svay Pak village from the roof of the Sanctuary

And then dinner… we usually chose a restaurant nearby because we were simply too exhausted to do much in the way of sightseeing or investigating gourmet delights. But dinner was always fun. We'd finished another day, we'd survived without calamity, we'd accomplished something. We ate, we laughed, we talked.

Fairview is a small church, and the concept of "family" is alive and well in this congregation. This trip was a family trip, even though only four of us actually got on the plane. Every night we were greeted, encouraged, and cheered by emails from church members. They met regularly to pray for us. We had a "Skype" meeting at a congregational breakfast — it was 9 p.m. in Cambodia, and we were exhausted. We were expected to blog and to post pictures — the family cared. It was very moving to return late one rainy Sunday evening to find dozens of Fairview people gathered at the airport to welcome us home. They waved a banner with greetings and signatures from many more. It meant so much!

What do you do when you look out the front of the building, knowing that young girls across the road, behind shuttered windows, lie sedated and imprisoned, waiting to be trafficked to anywhere in the world; or when you look out the back of the building to the shanty that has a world-wide reputation in the online pedophile community for providing tiny little girls as young as three or four to meet the sexual desires of men from Canada, America, Sweden, Korea, Germany…? I did not recognize even one little girl from when I was there in 2008. Where were they? I can only assume they have been trafficked to other countries.

What did we do about all this? We painted. Inch by inch, we worked against the evil that sustains this small village. And when I got depressed or overwhelmed, or when that ugly voice in the back of my head chided me that we really were doing nothing of value, that our hard work was a mere speck… then I remembered the songs and shrieks of delighted laughter coming from the happy kids at Rahab's House, and I smiled. And I painted and painted and painted.

"Truly I tell you, whatever you did for one of the least of these brothers and sisters of mine, you did for me." – Matthew 25:40

If you would like to know more about the work in Cambodia, please go to www.ratanak.org.

Saturday, September 26, 2020 - Thank our Sovereign Lord for our sisters and brothers serving Him around the world, and pray especially for those who suffer for their faith, that they may be blessed and be a blessing to their communities.