It is with sadness that we report the passing of Renewal Fellowship member Ken Wilson on October 31. Perhaps it is significant that Ken passed on All Saints Day, and I can almost hear him chuckling about that. It was also on a Sunday, and I suspect he would mention that it was his time to lie down and enter into the eternal rest. Ken had a keen wit and a dry sense of humour that delighted those who knew him. The funeral service was held in a full church at St. John and St. Andrew's Presbyterian Church in Hamilton on Thursday, November 4, and led by the Reverends George Beals and Gordon Fish. Two of his grandchildren, Andrew and Brandon, read the Scripture lessons, and his sons John and David shared a moving tribute to their father. He was the beloved husband of Donna (nee Truscott), loving father of John (Charlene), David (Liz), dear grandfather of Andrew, Brendan and Christian. 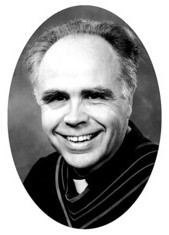 Ken had served as minister in several congregations including Buchanan; St. Andrew's, Kirkland Lake ON; Westminster-St Paul's, Guelph ON, and in retirement at Calvin-Grace in Hamilton ON.

I knew Ken best after he recruited me to assist in renewing Dorothy Lake Camp. When he was minister at Kirkland Lake, he had been instrumental in working with others to acquire the land and build the initial buildings at camp. After serving the Presbytery of Temiskaming for a number of years, the camp fell into disuse. In an effort to revive it, a committee was formed and it came under the Synod's Camping Agency CAIRN. One day, Ken called me up and asked, "You do renewal don't you?" I replied that indeed we did, as God enabled. He said, "I have something for you to renew." He then went on to explain the situation and hoped we could help. We connected with the Dorothy Lake Committee and offered to help by being the teacher for family camp, advertising the camp, and having Bill Harrison, my Administrative Assistant, come and do the canoeing. We have been doing that every year for well over a decade.

At our suggestion, a partnership was formed with the Renewal Fellowship, Dorothy Lake Camp, and Georgian Native and Outreach Ministries, and for the last several years, camps have been held for aboriginal children and teens.

Among some of my fondest memories of camp was hearing Ken sitting out in the birch grove or in the tepee lodge playing hymns and songs on his keyboard — sometimes surrounded by others joining in the praise, and sometimes just sitting alone. One wonders if he won't be given a keyboard to join in the heavenly chorus.

Ken and Donna were always hospitable, and one thing the Fellowship was thankful for was their hosting of a monthly renewal prayer luncheon in their home in Hamilton for several years until poor health prevented them from continuing. We look forward to a glad reunion.

Friday, July 10, 2020 - Pray for Senior Minister, Geoff Ross, of St. Andrew's Presbyterian Church, Brampton, Ontario. During the COVID-19 crisis, he has been keeping the congregation connected with new online ministries and initiatives, and daily walk-by visits in a different neighbourhood every day. He also has a number of leadership roles in presbytery.