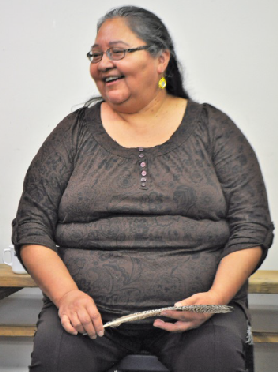 Cowichan — It’s a midweek evening in the sanctuary of Grace Presbyterian Church and 10 people are gathered in a talking circle. Holding a feather, Mary Peter opens in prayer.

“What fills your cup?” Peter asks, then passes the feather to the person on her right.

“Prayer, family, people” are some of the other words spoken.

It’s a weekly event in this First Nation congregation, and for some of the participants, it’s the closest thing they have to family.

Peter, a high school guidance teacher, is one of the leaders of the church, one of four planted by Rev. Joey Cho, executive director of Cedar Trees, the visionary leader of the mission, which began in 2007. 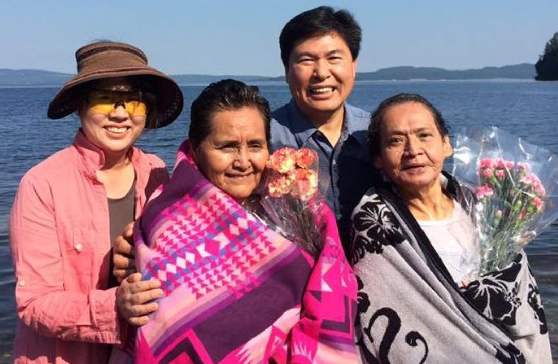 Cho was a lost teenager in the early 1990s in South Korea and he’d been invited by a friend to attend church one evening. In South Korea, many churches are huge, with professional musicians. But he got more than a dose of entertainment. On the way, his friend told him about the sinful nature of humankind, of God’s love for us and of the need for reconciliation through Christ.

“The Holy Spirit came upon me and I met Jesus that night,” Cho said. A few days later, he found himself at a Presbyterian church, where he felt more at home. He was baptized in the Holy Spirit and discovered his gifts. The process of transformation began. Miracle one.

At just the right time, God called Joey to go to seminary. He was ordained in 1996 and entered the ministry. In 2001, he met a group of Korean Canadians who told him about Canada’s First Nations. “Something in my heart was bursting,” Cho said. After 20 days of intensive prayer, he knew he had to go. Miracle number 2.

But his local church refused to support him, saying Canada is not a mission field. Listening to God, he went anyway. In September 2001, he and his wife and two elementaryschool aged children came to Canada. No job. No plan. Very minimal English. Just a firm conviction that God was leading them. They arrived in Vancouver and spent that fall looking for the mission.

So on December 24, yes Christmas Eve, they arrived in Nanaimo. Again, no plan. They were continuing to live on personal savings.

One day in Victoria, sitting in a park, looking at the ocean and missing their friends in Korea, praying for God to show them a sign, a stranger showed up. “Are you looking for a church?” he asked. He was the pastor from Cowichan, where he met a native believer who told him about his people. Miracle number 4.

Some time later, they checked out a small Koreanspeaking congregation for a taste of their homeland and language. They quickly discovered he was a pastor and asked him to be part of their congregation. But Cho believed his mission was to natives, so he said no. On the way out of the parking lot, his car hit another. He went back inside, realizing God was calling him. Miracle number 5.

Three years later, his original call to First Nations was revived and he resigned. It was 2007. His family and one other started a storefront church in Duncan. He went door to door on the reserve. Three years later, they had 30 people each Sunday, but still no official recognition from the Cowichan First Nation band council, which was essential if they were to establish a church on the reserve.

One of the members of Joey’s congregation was a retired RCMP officer with end-stage cancer. His dying wishes were for a funeral conducted in his native language, but with pastor Joey leading the prayer.

A tribal elder stood before the congregation and introduced Joey, vouching for him, saying “This guy’s okay; you can trust him.” The funeral was an opportunity to share the gospel in a new way. It resulted in invitations, hospital visits, more funerals, more believers. Finally, band council allowed them to rent a prefab building, which is now busy seven days a week. Miracle number 6.

It wasn’t easy, as the church suffered some vandalism at first, but which ended when a church member carved native images and attached them to the sign. Joey has now planted four churches on the island, one a three-and-a-half hour off-road drive through the bush. First Nation leaders are now calling him. No more cold calls. And in each church, Joey has trained believers into leadership roles. Mary Peter is one of them. She leads the Wednesday evening potluck dinner. She’s actually been a believer longer than Joey. God’s hands were working, preparing that First Nation for evangelism a decade before he arrived.

By now the Vancouver Island presbytery took his ministry under their wings and Joey was taking extra courses to become ordained in the PCC and met John Paeng, a fellow student at Vancouver School of Theology. A friendship formed. When a church in nearby Parksville became open a few years ago, John was called. And now he’s become Joey’s spokesman, his PR man. Joey is a prophet, a visionary and answers God’s call to plant. John was born in Canada and knows the English language and Western culture and is more of an administrator. God knows what we need and puts people together. Miracle No. 7.

The story continues to unfold, more proof that God’s hands are always at work in ways we sometimes cannot see.

There is social service and caring for the least of these. But it’s founded on solid spiritual food, centred on the Gospel of Jesus Christ.

Joey sees his task as church planter as “opening the door and then others follow up and take over.” Says John: “He’s a visionary, a developer.”

Cedar Trees is among eight native ministries listed on the PCC website. But it’s the only one which does not receive funds from Canadian Ministries.

Undeterred, Joey keeps moving. The gospel spreads, lives are transformed and like the church which cannot die, the mission plants itself.

Friday, September 18, 2020 - Pray for congregations seeking to encounter today's culture with the good news of Jesus Christ, that they may faithfully represent the God who seeks and saves those who are lost. Ask God to instruct them in engaging people of all ages and backgrounds in conversation, and to pour out His love through them.